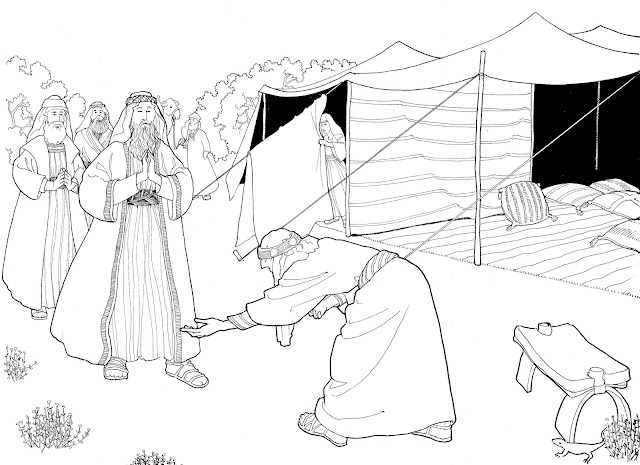 Sometimes I draw the same story over and over.  This is the fourth version of this one, from Genesis chapter 18.

Three men come to visit Abraham, who is a semi-nomadic shepherd, living with his wife and his servants in tents. The travelers who come his way are few, and those who arrive are treated with the respect and hospitality we might assume would be accorded kings.  Like the bedouins of the Arabian peninsula, for Abraham the law of hospitality is absolute.  When these men come, he bows before them, asks them to stay to refresh themselves, and has a feast prepared for them.
It is not clear whether or not he recognizes at first that they are heavenly visitors.  Perhaps this is the welcome he gives to all visitors.  But indeed soon he finds that it is God himself along with two angels he has been entertaining, and they have great news for Abraham and his wife Sarah: next year Sarah will have a son.  Abraham and Sarah have been waiting 25 years for this son, since the first time God gave the promise to Abraham, and now it is finally the right time.

Postcard from under the sea

The sea is full of mysteries.  I walk on the beach almost every morning, when the sky is grey, and what we see of the sea is grey as well.  Now, during the summer, the shorebirds that inhabit the shoreline have gone somewhere else, and only seagulls and pelicans are consistently around.

But underneath the surface are wonders that are utterly hidden from us.  Occasionally you can see the dorsal fins of dolphins just beyond the waves, as they surface and dive.  But even that is mysterious.
The people who know what is there are the divers who have discovered a way to stay underneath, explore, and even photograph the suboceanic topography and life.

Some years ago I discovered the glorious underwater photographs of Kawika Chetron .  This is a guy who loved the world of cold water.  He was happiest when he was under the sea, exploring, photographing, finding Life among the creatures that live there, especially along the coast of California.  Recently I found that Kawika, like Seth, had died as he was stretching the boundaries of what he could do, in his continuing effort to be truly alive.  He was a little younger than Seth, and died about a year later, in March of 2007.

This postcard of a little man riding the gorgeously colorful Spanish Shawl nudibranch was inspired by Kawika's photographs and Seth's delight in all things.
Posted by Vicki at 8:10 AM 2 comments: