I have a series of stories to illustrate about a group of kids who live in Texas in the 1950's.  Nice, kind of slow moving stories, with conflicts, but not the kind of dire conflicts kids today face.  Their conflicts are more about simple getting along with one another.  One of these stories concerns the summer pleasures of floating down a stream on inner tubes.  After deciding on the general look of the picture, I started drawing it.
Here is the drawing: 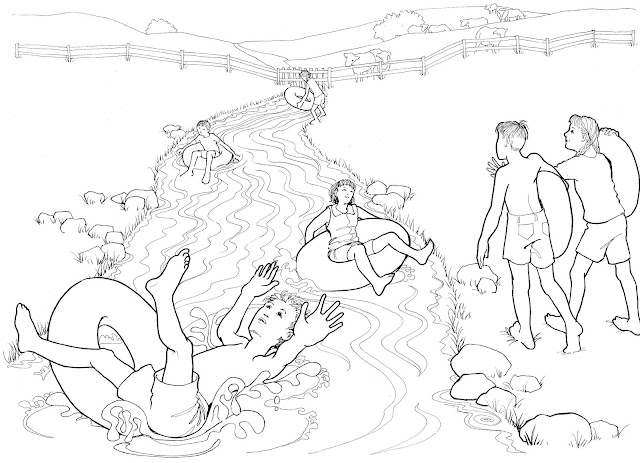 I liked it pretty well, except that each of the people in it was as though they were in their own box--no overlapping, except for the two at the right, and the two of them were sort of in their own box.  Besides, the boy at the front, falling off his tube, looks not quite right.  And then, the deciding factor was that I reread the story and found that according to the words they are all supposed to be wearing shoes.
It is always good training to be willing to do the drawing over and over again; it's something I learned from Seth.  Don't let it go out unless it is as good as you can do
So here is the second one: 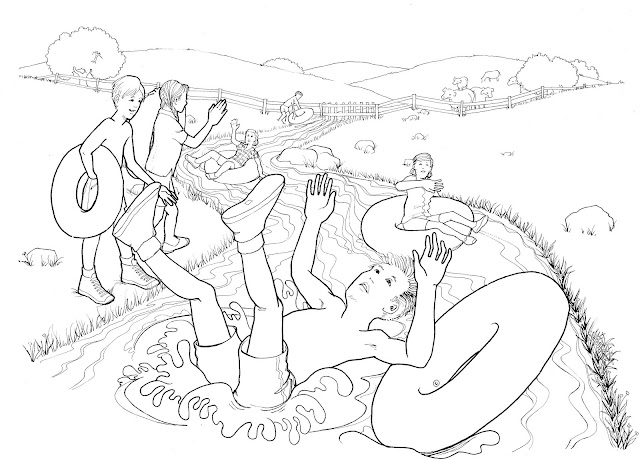 Shoes on, some overlap, much better.
Although the boy on the left, with the tube under his arm, has a left arm that is far too long...
And the boy splashing in the water still looks a bit disjointed.

Then I spoke with the author, who said that he had decided to give each of the drawings a full page in the book.  That means a vertical, rather than a horizontal layout.
OK, no problem.  I'll draw it again.


This time, for the vertical layout, I thought I'd better do a little more research on rivers, how they look, how water looks when it is flowing.  Doing it all from the imagination is fine, but it may be better to get some real feel for the landscape.
Here is the third drawing: 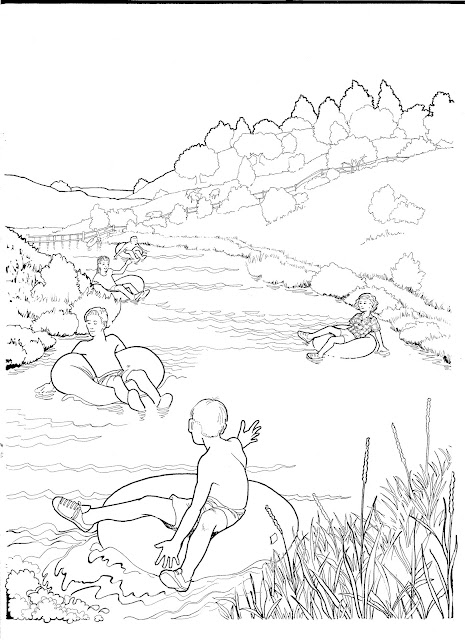 OK.  I like the scenery much better.  It looks like a real place.  The little patch of reeds and grasses in the front right corner brings the viewer into the setting some more, all the kids have arms and legs in proportion.
But there is a different problem: it's dull.  Nothing is happening.  Something is GOING to happen, as the boy with his back toward us is just about to hit the rapids, but everyone else is just floating.  Besides all the kids except one are in a vertical line.  Accuracy in drawing can NOT take the place of interest--either interesting composition, or interesting emotional action.  Accuracy is good, but for an illustration it has to take a back seat to emotion and vibrant composition.
Then I reread the story one more time, and found that there was some action in it that I had ignored.  In the girl in the plaid shirt teases the boy ahead of her by splashing him as they float along.


So below is what I think is the final:
It has action, accuracy, rhythm, and, I hope, interest.  I may find something else it needs, and if so, I'll change it again.  Or if anyone who sees this is bothered by something, I would be glad to hear about it.  I learn something every try. 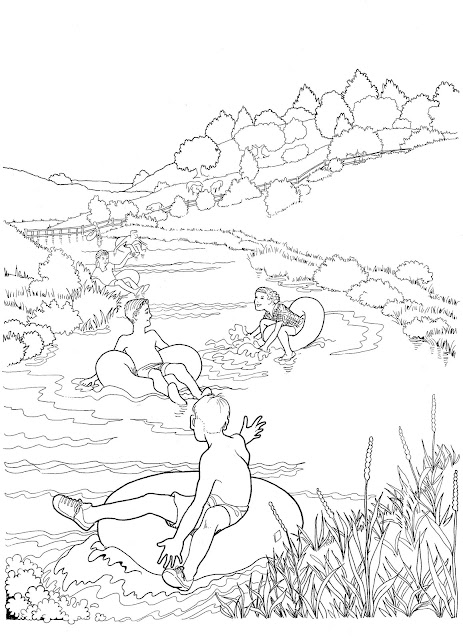 Email ThisBlogThis!Share to TwitterShare to FacebookShare to Pinterest
Labels: illustration, pen and ink 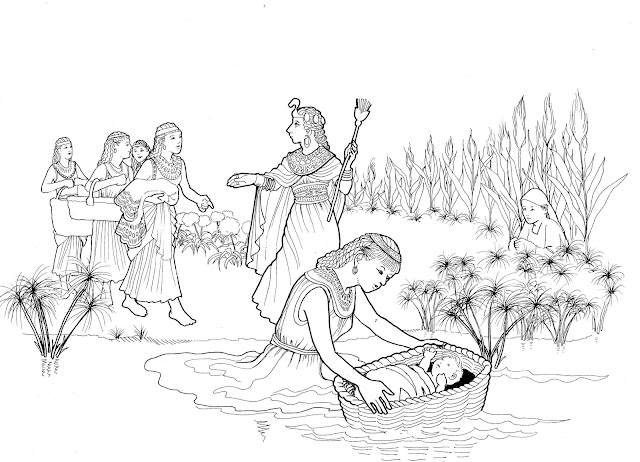 Continuing to illustrate the handouts for my sixth grade Sunday school classes.  The subject matter is always available, the kids like the drawings, and I have an ongoing, low-pressure commission.  If I decide later that my skills have increased so that I can depict the story better, I'll redo it for next year.
Posted by Vicki at 2:26 PM 3 comments: