St. Melangell and the prince 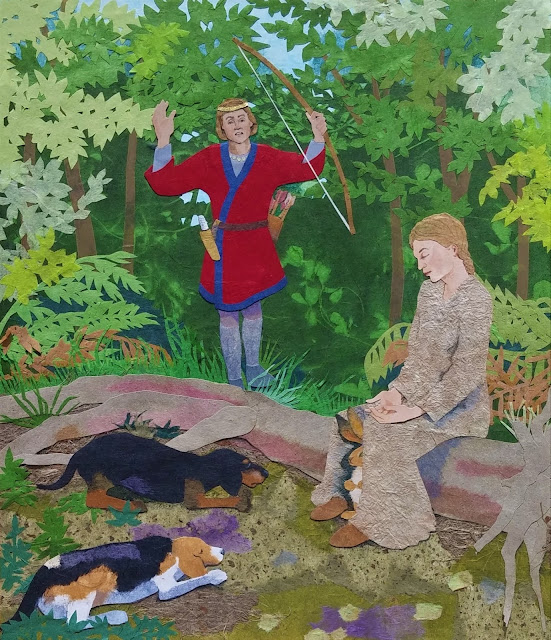 Wales.  6th century.
Melangell is praying in the woods where she lives as a hermit.
Prince Brochwel is hunting on his land, annoyed because he has been out all day without running across any game.
Finally, late in the day, the dogs catch the scent of a hare and give chase.  But what gives?  The hare is hiding in the folds of Melangell's dress, and the hounds, cowed by her peacefulness, refuse to do what they have been brought along to do: grab that hare.

The density of the greenery was fun to play with.  The dogs are taken from modern hunting dogs.  It is likely that sixth century hunting dogs would not have been as uniform in size and shape as the ones they breed now especially for hunting particular game.
The prince would have hunted with a bow and arrow, but would have had a knife, and possibly some other tools as well.  He seems not to have taken a servant with him on this expedition.

Melangell is a true woman of God, and her prayer is so deep that she is unaware of the dogs, or the approaching prince until he accosts her.

May I learn to pray like that.
Posted by Vicki at 7:00 PM No comments: