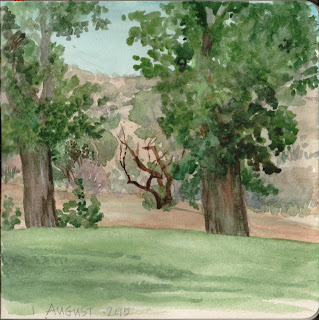 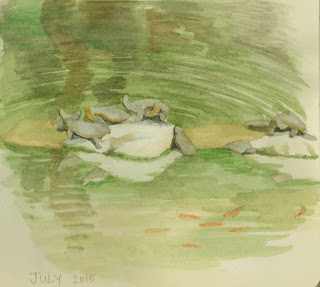 We spent the weekend at St. Andrew's Abbey.  I always take my little watercolor sketchbook; this is one of the few places where I actually use it. There are no telephones there ringing for me, no computer, no laundry, no meals to fix: only lessons about God and prayertime with the monks, and walks. So there is time to paint when nothing else is calling me.

Each of these little sketches took about an hour.

There are many turtles in the pond, red sliders, the kind kids keep in those little plastic kits until they get tired of them.  I guess someone brought one or two here because the abbey's pond is quite big, a small lake really, and the turtles thrived and multiplied.  It's funny how they pile up on top of one another on those rocks in the afternoon sun.  They don't seem to mind close association with each other, even to being used as benches.  Some of the rocks seem as though they would be too steep for creatures as clumsy as a turtle to climb up, but we watched one of them sitting on a rock at about a 45 degree angle for a long time, until he finally slid back down into the water.

In the pond also are some very large koi, some smaller gold fish, or goldfish, frogs that sing on summer evenings, and a flock of ducks. The ducks are the descendants of a pair of mallards and some white ducks, hybrids that have mallard markings in a tan color.  They live here year round, coming toward me when I walk down the path, but scuttling back to their posts at the water's edge when they see that I have brought them no food.
Posted by Vicki at 9:00 PM No comments: