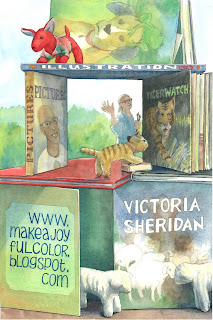 It really helps to have some critique from a friend you can trust, someone with a good eye who knows what good illustration can be, and doesn't let you get away with doing less than the best you can do.

Using the same basic idea (and some of the same books), I redid the postcard.  I am much more satisfied with this one.  Besides that, I won't have to put any information on the back: it's all on the front.
Posted by Vicki at 7:10 PM 2 comments:

Three little cats (two kitties and a very small leopard) found a nice striped feather one day.  They took it to Grandma, who looked it up, and said it was a tail feather from a Cooper's Hawk.  The little cats thought the hawk might need his feather, and decided to give it back to him.  So they sat outside holding it up for him, and waited.  But when the hawk came by, he had that "little cats might be good to eat" look on his face, and the cats hid under Big Dog.
In the end, it seems the hawk didn't want his feather back at all, so the cats sent it off to Tofu in Japan.  Maybe Tofu would like it, because we think there are no Cooper's Hawks in Japan. 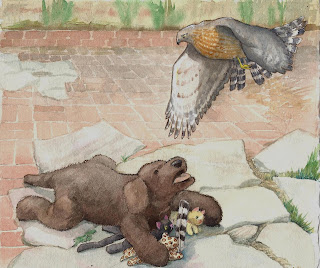 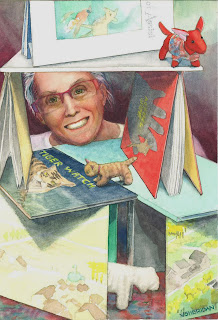 Here is a postcard I put together to send to publishers.
I'll sit with it for a while and see if it needs some help first.
When it seems ready, and I am armed with names & addresses from Children's Book Writers & Illustrators Market 2012, I'll send it out.

Critique is welcome.
Posted by Vicki at 9:31 PM 3 comments: