St Spyridon and the Poor Farmer and the Snake 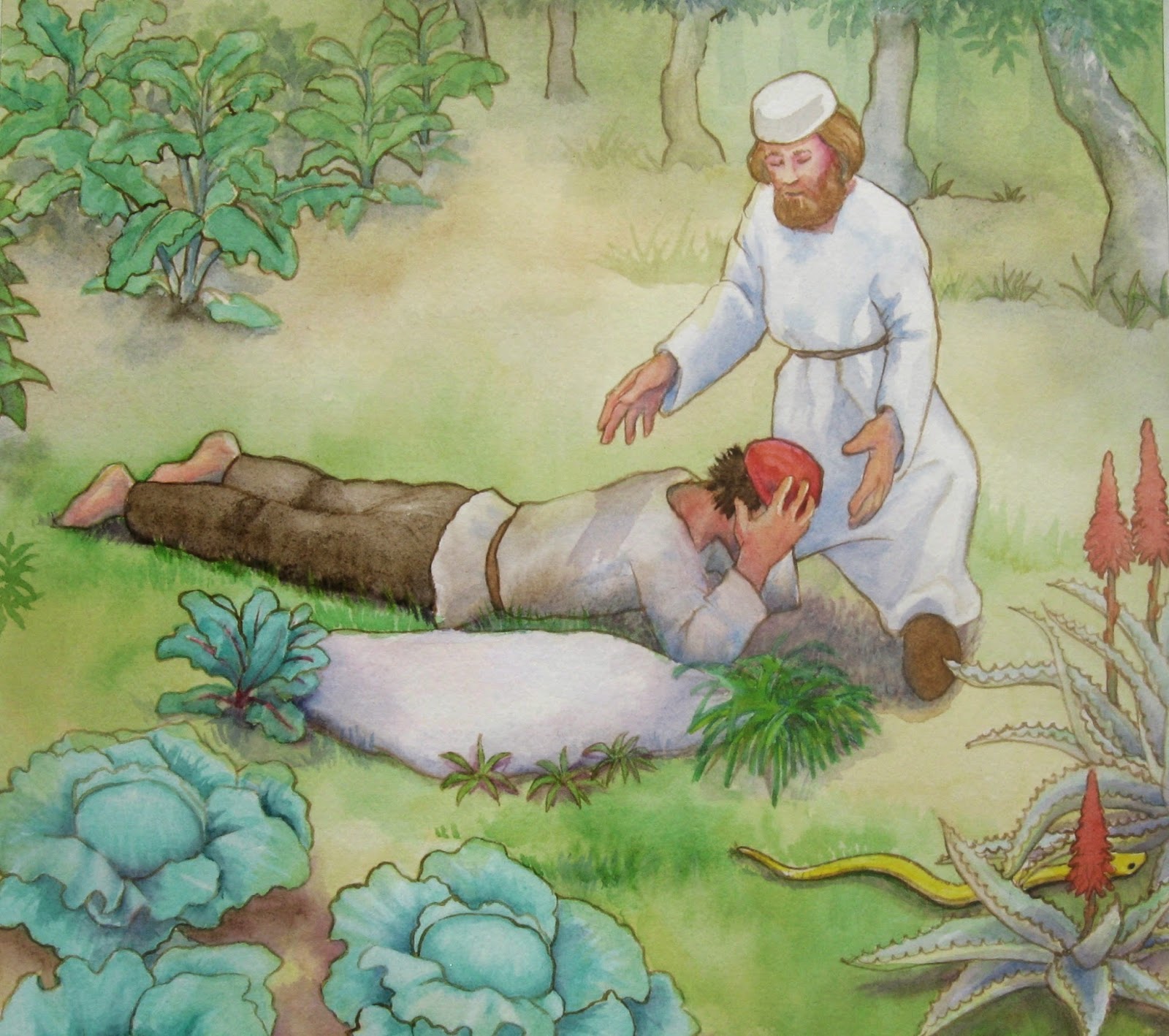 I finally finished the story whose title is the title of this blog post.  It is about St. Spyridon, a fourth century bishop of Cyprus, greatly beloved in the Eastern Orthodox church, a man both kind and down-to-earth, and a wonder worker.
The picture here is the last one of the story, and contains all three of the title characters.

According to the story (one of many told about St Spyridon), during a drought in Cyprus, the supplies of wheat dwindled so far that even the vendors, who bought wheat from the farmers and then sold it to others, ran out.  Only one vendor foresaw that scarcity meant high prices, and bought up all the supplies himself.  Eventually he was the only one with wheat to sell, and he raised his prices to the moon.  One poor farmer tried to borrow wheat from him, saying that he would pay it back with interest the following year, hoping for rainfall and a good year.
The vendor slammed the door in his face at that suggestion.  The poor farmer then went to see St. Spyridon, hoping at least for a kind word.  He received a kind word, and encouragement to hope in God.  The following day, St. Spyridon visited the poor farmer with a chunk of gold.  He told him to go to the vendor, and with the gold as collateral, to borrow wheat to plant and to feed his family. Spyridon told him to be sure to bring the gold back the following year when he had repaid the vendor.  The farmer did as he was told.  The greedy vendor gladly lent him the wheat in exchange for the gold, knowing that there was no way he would be able to repay it.  But the following year the rains were plentiful, and the poor farmer had a bumper crop of wheat.  He returned to the vendor with a large sack of wheat--enough to pay his loan with generous interest.  The vendor reluctantly returned the gold to him, and the farmer took the gold back to St. Spyridon.
The saint said to him, "Come, let us return the gold to the one who lent it to us," and he led him out to the back of his own garden where he set the gold on a rock, and prayed to God.  The gold turned into a yellow snake, which slithered away.
The poor farmer then fell on the ground and covered his face, saying, "I am not worthy of such miracles!"  But Spyridon gently lifted him up and said that for those who are humble of heart and ask him, God is pleased to work all kinds of wonders.

Among the stories of saints and animals, I chose this one because it is an unusual story because the animal in question is a reptile, a snake redeeming his kind from the bad press generated by the snake in the Garden of Eden.  It is an unusual sort of miracle too, whereby an animal gives its life temporarily for use by a saint, a gesture that is kind without being warm and fuzzy.

This is the first story where I put the words into form on the pages and then made the pictures to go into the spaces I determined for them.  That is clearly the way to do it.  People who take classes in this sort of thing probably learn this on day one or two, but when you are doing it all by the seat of your pants, as I am, it takes much longer to figure out.  But that's OK.
I am ready to begin the next story.
Posted by Vicki at 8:49 AM No comments: